Juhuligan is my first big game where my objective was to get a better understanding of how the game-elements work together, especially from a programmer's perspective. Being a side-scroller, there are a lot of different type of game entities interacting in their own ways. Thus, as my previous games have done, this game had exposed me to all sorts of challenges, and now, I have a much better understanding of game programming. Also, I learnt about some of the bad programming practises, the hard way!

I have broken down my journey in these parts:

Programming challenges:
When I started out making this game, I just wanted to improve my game programming skills. I wanted to understand things better than what I already did. Without a vision, I decided that the game would be something between mario and contra. This was my biggest flaw! (Lessons Learnt(LL) #1). I'll walk you through my development journey.

I wanted to make HUD more interesting than the usual HUD we have. I also wanted to keep it simple, else it would be too much for the player to handle. For one thing in particular, I needed a way to represent the player's health. After trying out different ideas, this one thing stuck with me. I finally decided to have a face which would give an idea of Player's health. Now, my concern was; the face expression would have to be changing dynamically, as the player takes a hit or a health pack. I pin-pointed the eye-brows and smiley feat to give the player an idea of its mood! My knowledge of Bezier curves really came in handy here and thus came about; my own generic Bezier curve library functions. To these functions, I simply provided the weighted points and it would return a list of points along the curve: 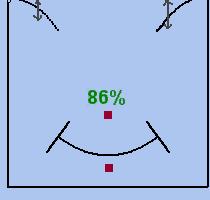 I now intend to write a generic function where the degree of the curve can be specified and requisite points.

Reusable Components from this game